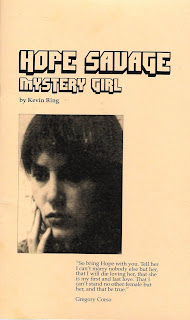 The latest chapbook (No 32) from The Beat Scene, this title attempts to trace Gregory Corso's muse, Hope Savage, who disappeared in India in the early 1960s. While many regard Savage as long dead, others are convinced she is still alive. An anonymous blogger claimed to have met her in Iran, Pakistan and Nepal in the mid-1970s, and in her book A Blue Hand: The Beats in India ( Penguin, 2008) Deborah Baker even hints that she may know of Savage's (then) whereabouts.
A captivating, yet distressing essay on yet another 'minor character' in the Beat saga.
Visit The Beat Scene for order details.
Posted by Gary Cummiskey at Sunday, December 25, 2011
Labels: Gregory Corso, Hope Savage, Kevin Ring, The Beat Scene

I enjoyed the article very much....left me feeling that perhaps the 'free spirit'Hope S. was a wakeup to the fickle mind of Gregory Corso......and G.C. wanted what he couldn't have.....she certainly left a permanent mark in his mind......and left me wanting to know more and more of what ever happened to her, I want to know more about her......I guess that's the reaction of people to most mysteries......PAM SCOTT

hello
i was so surprised ,typing on google
hope savage to find an answer i could not believe it, as i met herin lebanon on the 70th she had two children at that time and the whole story seems to fit as she has been before stuying in pakistan she had such a natural open hearted attitude but then mysterious ,she teached me some urdu and i showed her some basic words in arabic this was aroud 1970 71 i would really like to have more news , such a long long time her eldest girl at that time 2 years old had billy as a nick name please let me know if ever it was allways very simple but so mysterious,,,,,,thank you again for any news

I have often thought that "Hope Savage" may not have been her real name. She was definitely a facinating figure in beat literature. "Hope Savage" could be a statement in itself. I would love to find out what became of her.

Hope Savage was absolutely her real name. She is actually my father's first cousin. My grandmother was Hope's father, Henry Savage's sister. I just so happened to pick up "The Blue Hand" not so long ago. It was only after I got home, that I saw it mentioned Hope. It is certainly a small world.

Margaret, Thanks for your post! Do you know what happened to Hope?

Margaret - If it will not be too much of an imposition on Hope's privacy -- Please keep us posted.