For many years I disliked their poetry. His poetry – filled with cold, bleak landscapes, hawks in the rain, battered cats, and predatory fish hiding in ponds deep as England – gave me a taste I imagined as being similar to frozen mud. Her poetry – with its intricate imagery of birth, death, flowers, trees and bees – seemed too restricted, constrained, and laboured (i 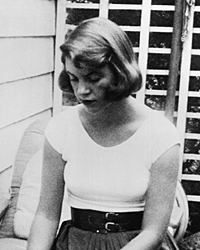 s it true she wrote with an open Thesaurus at her side?)

It’s difficult to believe they were married. On the surface, despite their shared literary activities, they didn’t seem suited, almost from two different worlds.

Sylvia must have been impossible to live with, or even to have around. As a child, on hearing of her father’s death, she announced: ‘I’ll never speak to God again!’ A stubborn, angry, refusal, born out of shock and disbelief; acceptable perhaps in a child, yet the same attitude seems to have continued into her adulthood: a sense of betrayal, a demand that things go her way, that all events and people adhere to her wants and needs. And when the universe would not adhere to her wishes, she withdrew into rejection and depression, casting friends aside, highlighting how they let her down, how they failed to live up to her expectations, just as both God and her father had betrayed her. Shortly after his death, she demanded that her mother Aurelia sign a pledge not to remarry. Aurelia, still in her early thirties, adhered, but this wasn’t enough to satisfy Sylvia. Later she would attack her mother precisely for signing it. With Sylvia, one has the impression you could never win.

But such contrariness was not simply that of a spoiled child. Sylvia’s psyche was in a near-continual state of torment, hurt, fear and instability. Throughout school and university she did her utmost to conform, to fit in, to be popular. She tried to be the model student and the model daughter. She insisted on perfection, for herself and for others. She dyed her hair blonde, had several boyfriends, each of them initially satisfying her need for a father figure, the strong, ever-reliant God, unwavering and invincible; the man who would never fail her, but inevitably they would – and then it was they who were to blame. As one of her biographers, Ronald Hayman, remarked: ‘She was good at making friends, and she was good at losing them’.

In 1953, shortly after spending a month as guest editor of Mademoiselle, Sylvia told Aurelia: ‘The world is so rotten, I want to die! I Let’s die together!’ Her mother’s response was to place her in an institution where she was subjected to electric shock treatment, later to be recounted in her prose work, The Bell Jar. Perhaps understandably, Aurelia also soon found herself on Sylvia’s betrayal list. On returning home, Sylvia attempted suicide by taking an overdose of sleeping pills (‘At twenty I tried to die/And get back, back, back to you.’) but was rescued in time.

Nevertheless, Sylvia managed to win a Fulbright fellowship to study at Cambridge in England, where in 1956 she met up with the young Ted Hughes at a party. Their first meeting was aggressively physical – he ripped off her hair band and kissed her, while she bit his cheek so hard that it bled. Ted was now Sylvia’s God, the tremendously strong masculine father figure who would be unwavering, dedicated and unfailing. She insisted on remaining at his side for years, rarely separated from him for more than a few hours at a time.

Within a few months they married, but even while on honeymoon in Spain, it became clear to Sylvia that the marriage would not be as ideal as she imagined it would be. Ted had untidy habits, leaving clothing and papers lying all over the place; she was fanatical about cleanliness. Tension rose. He even hit her on occasions. Ted’s family didn’t warm to Sylvia too well either, particularly his sister Olwyn. Sylvia was also ill at ease in English literary circles. 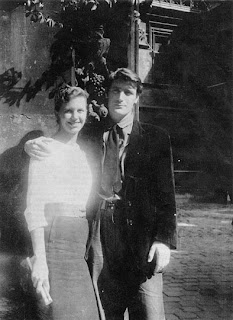 Despite all, she remained dedicated to him (‘Every woman adores a Fascist,/The boot in the face…’) She typed up his manuscripts and sent his poems off to literary journals with promptness and devotion. She was determined to make him known as a great poet. When his first collection, Hawk in the Rain, was published in 1957 and won a major literary prize, her faith in him seemed vindicated.

In the meantime, they travelled to the US where Sylvia taught at Smith University. She worked hard at her own poetry but her attempts to find her voice remained frustrating. Worse still, one day she caught Ted in what seemed like a hurried termination of an amorous encounter (later Ted maintained he had bumped into the woman only seconds earlier and had simply chatted to her). Soon after, the couple returned to England, mainly at Ted’s insistence.

After a brief period in London and the birth of their daughter Frieda, they moved to a house in a village in Devon. Sylvia was initially ecstatic about the move. Ted was becoming an increasing well known and respected poet among the English literary establishment, and her own first book, The Colossus and other Poems, was published in 1960.

But the optimism and calm was short lived. A miscarriage, financial pressures and increasing frustration over the isolation of the village sent Sylvia into a depression. When Ted’s affair with the seductive Assia Wevill was uncovered, tension reached new heights. Even the birth of their son Nicolas could not save the marriage. They separated at Sylvia’s insistence.

Left alone with two small children in the village, Sylvia’s powerful poetic voice burst forth in many of the Ariel poems, such as ‘Lady Lazarus’, ‘Daddy’, ‘Fever 103’, ‘Poppies in July’ and ‘Sheep in Fog’ each of them revealing her sense of anger, betrayal, loss and inner torment, taking her ‘through to a heaven,/ starless and fatherless, a dark water.’

She took sleeping pills to ward off insomnia, but by dawn they would have worn off and she was unable to get back to sleep, and so remained awake until it was time to tend to the children. A friend suggested she use this time to write, and so The Bell Jar was written.

Leaving Devon, Sylvia moved to a flat in London, desperately trying to make a new life for herself and the children. But at the height of a freezing winter, depression, illness, despair and financial worries overtook her. On February 11, 1963, she committed suicide by gassing herself in the oven (‘Daddy, daddy, you bastard, I’m through.’) She had carefully sealed off the children’s bedrooms to ensure they would be safe from inhalation. A few weeks earlier The Bell Jar had been published anonymously and she had prepared Ariel for publication.

After her death – and the arrival of posthumous fame – the debate about the reasons for Sylvia’s suicide began to emerge, as well as often bitter battles between pro-Plath and pro-Hughes supporters.

While acting as editor of Sylvia’s works and ensuring their publication, Ted’s editing was regarded by some as over-zealous. When Ariel was published in 1965, he removed about 14 poems that touched on their collapsing marriage. These poems were only included in a later edition.

When Sylvia’s journals were published in 1982, Ted admitted to deleting passages, though oddly enough included some unflattering entries, including those referring to his beating her. However he also stated that one volume of her journals had ‘disappeared’ and admitted to destroying another (‘I did not want her children to have read it,’ he said.)

When A Alvarez included a chapter on Sylvia in his book The Savage God – a work that brought Sylvia’s tragic life to the public – Ted tried to halt its publication. This was the beginning of several legal wrangles regarding publications on Sylvia’s life. 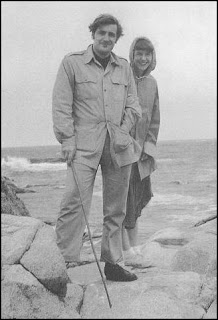 While Ted’s grief over Sylvia’s death was certainly genuine, his actions suggest an increasingly public figure eager to hide any shortcomings in his personal life. When Assia committed suicide in 1967 – also by gassing herself and killing her and Ted’s son Shura at the same time – Ted’s life became even more emotionally strained. Some people had felt that both Ted and his family had laid the blame for Sylvia’s suicide at Assia’s feet.

Bewildering to many was Ted’s decision to make his sister Olwyn the agent for Sylvia’s estate, especially considering the antipathy that had existed between the two women. While Olwyn had told some that she had always acknowledged Sylvia’s poetic gift, she had also, according to Hayman, called her ‘a famous poetess Grace Kelly dream who descended on Yorkshire. Bloody cheek. An American student with a couple of poems in magazines.’ When Anne Stevenson published her biography of Sylvia, Bitter Fame, in 1989, presenting very much a pro-Hughes slant, it emerged that the book was effectively co-authored by Olwyn, particularly the final chapters.

Eventually, in Birthday Letters, published in 1998 shortly before his death, Ted spoke openly about his life with Sylvia. The book is filled with warm, sad and painful memories (‘Remember how we picked the daffodils? Nobody else remembers, but I remember’), devoted to the woman who was caught in her ‘tortured, crying / suffocating self’, a woman he felt to be ‘locked/ Into some chamber gasping for oxygen/ Where I could not find you, or really know you,/ Let alone understand you.’

So who was Sylvia? Was she, as Anne Stevenson called her, ‘a martyr mainly to the recurrent psychodrama that staged itself within the bell jar of her tragically wounded personality’, a self-destructive woman who wrote: ‘Dying/is an art…/I do it exceptionally well’, an explosive and unpredictable neurotic woman ‘terrified by this dark thing’ deep within her?

Or has the truth of the final months of Sylvia’s tragic life been sacrificed to the interests of a respected poet laureate and his protective, dedicated sister?

It is unlikely the full story will ever emerge.

That was good, Gary. Thanks. Sylvia always seems to bring me back to earth and to the simple things that poetry needs to address.

did you write that Gary?... I am a die hard sylvia fan and have read almost everything ever written by her, Hughes and about her..i enjoyed this piece a lot
thanks
melinda ferguson
author: Smacked

Great article Gary. Was always a die-hard Sylvia fan - is that a good phrase, I wonder!? But loved your article and somehow missed the fact that Ted's second wife also did herself in. In the kitchen. With the oven. And their son. Oh my God! Is being Poet Laureate a compensation for being a really crap husband? I don't know. Have always like Ted Hughes and some of his poetry. But how can we not wish for all those missing volumes... So much depends upon them. Like a red wheelbarrow.