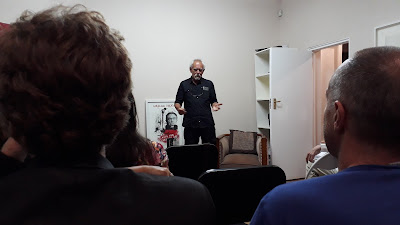 James de Villiers talks at the launch of Graeme Feltham's new book With the Safety Off, published by Dye Hard Press. There were some innaresting speeches, particularly one by my old china, Nick Hauser. Nick drew parallels to Fig and Dostoevsky's Raskolnikov, both schismatic characters, and cited similarities between Graeme and Herman Charles Bosman. High praise indeed for a grungy book about drugs in Yeoville in the 90s ..