Coming soon from Dye Hard Press and altoviolet: With the Safety Off by Graeme Feltham 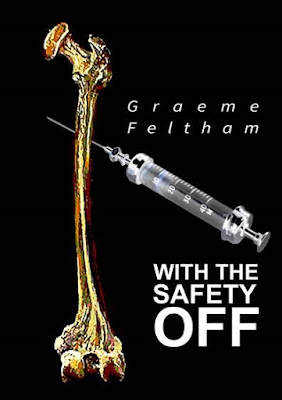 It’s the mid-1990s. Yeoville, along with the rest of South Africa, is in the midst of change. Enter Fig, a copywriter with a penchant for living on the edge – staying up all night, having casual sex and snorting cocaine. Drifting from seedy clubs to grotty flats, Fig continues his aimless odyssey …  until the day he falls asleep in a client presentation and is fired.

Nine months later Fig is hooked on heroin and turns to drug-dealing for survival. If his previous lifestyle skirted close to the danger zone, it’s now gloves off as he drops all pretence of respectability and descends into a world of syndicates and violence. There is no going back, but Fig doesn’t care.

From now on, he’s living with the safety off – no matter where it leads him.

At once harrowing and humourous, despairing and cynical, Graeme Feltham’s stark novel With the Safety Off plumbs the depths of mid-1990s South Africa, capturing both the exhilaration of freedom and the insecurity that comes with change.

Pricing to be confirmed.

Graeme Feltham was born in 1965 and grew up in Uitenhage. He completed a degree in journalism at Rhodes University and moved to Johannesburg in the late 1980s. In addition to being a writer, he was an experimental composer and performance artist. His novella One Hundred Naked Beers was published by Brevitas in 2002. His work also appeared in literary journals such as New Coin and donga. Graeme took his own life in December 2017.
Posted by Gary Cummiskey at Sunday, June 16, 2019
Labels: altaviolet, donga, Dye Hard Press, fiction, Graeme Feltham, James de Villiers, New Coin, One Hundred Naked Beers, With the Safety Off