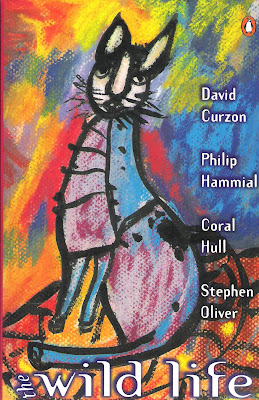 The Wild Life was published by Penguin Books Australia in 1996 and contains four poetry collections: Dovchick by David Curon, Black Market by Philip Hammial, William's Mongrels by Coral Hull and Islands of Wilderness: A Romance by Stephen Oliver.

One of Hammial's prose poems in his collection is:

In the rat's stomach there's an alarm clock set to go off at 6am & in the cat's there's a sleeping man, his head buried under a pillow. Only one chance in ten thousand that the cat will catch the rat at exactly the right moment, but the miracle occurs. The man hears the alarm, leaps out of bed, throws on his clothes, gulps down a cup of coffee & manages to catch the 6.15 bus that will take him to work.
Posted by Gary Cummiskey at Friday, April 01, 2011
Labels: Black Market, Penguin Books Australia, Phillip Hammial, poetry, The Wild Life