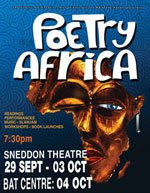 29 September to 4 October promises to be a stirring week of words, rhymes, performance and ideas, as the 12th Poetry Africa international poetry festival ignites Durban with over twenty poets from around South Africa , Africa , and the world. Hosted by the University of KwaZulu-Natal's Centre for Creative Arts, Poetry Africa's intensive week-long programme kicks off with a pre-festival showcase of Durban poets at The Workshop Shopping Centre's Amphitheatre on 28 September at 11h00. The showcase forms part of the Imagine Africa initiative which seeks to create platforms for challenging stereotypical ideas of Africa and imagining a better continent. The week encompasses introductory performances by the full lineup of participating poets at the Elizabeth Sneddon Theatre on opening night 29 September, and will thereafter feature 5 poets every evening, through to 3 October, before the rousing Festival Finale at the BAT Centre on 4 October.

The as-always diverse selection of poetic voices, styles, forms, and cultures includes the finely-tuned verse of teacher, photojournalist and activist Kole Ade-Odutola ( Nigeria ). Ade-Odutola's celebrated second collection of poetry The Poet Bled is dedicated to Ken Saro Wiwa, the author and environmental activist who was killed in 1995 by the Nigerian military junta. The lineup from Africa also includes Angolan Nástio Mosquito, a provocative artist, performer, and poet whose often satirical work will be accompanied by South African musicians. Kenyan Bantu Mwaura's laconic poetry is principally concerned with examining the African continent, its politics, its history and its place in the international arena. Nassuf Djailani, from the Indian Ocean island of Mayotte , is the author of two poetry collections rich in humor and tenderness. The multi-talented Rogério Manjate ( Mozambique ) recently won the Best Short Film Award at the 29th Durban International Film Festival and looks set to again wow Durban audiences with his distinct and humane voice. Legendary Zimbabwean musician Thomas Mapfumo – whose music is now banned in Zimbabwe – has been making his captivating Chimurenga music for over thirty years. His incendiary songs, patterned on ancient mbira rhythms and injected with a contemporary sensibility, are particularly relevant given the current political impasse to the north of our borders. Mapfumo will be supported by the guitarist and two mbira players from his group Blacks Unlimited. Mapfumo will also perform in special post-festival events in Johannesburg organised by African Synergy Book Café.

The as always strong South African presence this year includes Megan Hall, winner of the 2008 Ingrid Jonker Prize for her debut collection Fourth Child. Hall is a poet of startlingly vividness and – somewhat paradoxically – control and will launch Fourth Child, published by Modjaji Books, during the festival. Other launches include: Invitation To A Voyage (Protea Book House) edited by respected scholar and poet Stephen Gray. The collection features French-language poetry of the Indian Ocean African islands and is a wonderful introduction to the lesser-known but rich literature of the region. Prolific independent publishers Botsotso launch an amazing five new publications including one by top Durban poet Mphutlane wa Bofelo. UKZN Press will launch the second collection of Mxolisi Nyezwa entitled, New Country . Nyezwa is also a participant this year and has long been an acclaimed in local poetry circles for his powerful and difficult-to-classify lyrical poems. The festival this year offers an emphasis on performance and the spoken word, reflecting the growing diversity of poetic expression.

Sisters Tereska and Laverne Muishond call themselves !Bushwomen and infuse their poetry with song and dance to create a stage performance that is filled with energy and passion. Jitsvinger (a.k.a Quintin Goliath) is one of South Africa`s fastest rising hip-hop artists and delivers his conscious rhymes in an urgent and unique meter. Joining the Poetry Africa lineup this year is the trailblazing South African hip hop crew Godessa, comprising E.J. von Lyrik, Burnie, and Shameema Williams, whose poetry and music combination makes them some of the most relevant voices in the country.

Anton Krueger is an award-winning playwright and poet and brings to Poetry Africa his humanistic yet slightly view-askance verse. Andrea Dondolo, renowned for her role in the award-winning sitcom Stokvel , is also a skilled praise singer who is bound to captivate Durban audiences. Mak Manaka's sensitive and lucid poetry has seen him become a sought after performer at local and international events. Powerful, fresh and blessed with an enviable stage presence, poet and musician Ntsiki Mazwai also goes by her clan name, MaMiya. Her style of fusing her inspirational poems with beats resulted in the immensely popular single “Uwrongo”. Independent press hero Gary Cummiskey is the founder and editor of Dye Hard Press, which specialises in publishing South African poetry, and in his own poetry, spread over numerous collections, shows a deft hand at balancing the avant garde and the poetic.

Masoja Msiza is the brains behind the popular Lentswe Poetry Project on SABC 2 and his poetry focuses, in a non-didactic manner, on social concerns. Rounding up the South African component is the poetry collective Basadzi Voices, which comprises Shameeyaa neo waMolefe, Phomelelo Mamampi Machika, Busi Gqulu and Xoli Vilakazi. Basadzi Voices through their projects – which include a successful poetry anthology published in 2006 by UKZN Press – aim to represent the many voices, often silenced, of young women across South Africa . A special component of the festival is the Durban Poetry Showcase, which takes place at the Festival Finale at the BAT Centre. This platform showcases the collaborative talents of poets from leading poetry collectives in the city, including: Live Poets Society, Keen Artists, Nowadayz Poets, Poets Corner, and Pour a Tree.

The international presence at Poetry Africa includes the evocative, finessed verse of Dutch poet Marjolijn van Heemstra and American Carlos Gomez, a leading voice at the forefront of the oral poetry movement who has been described by critics as a “truth-telling visionary” and a “lyrical prophet”. Gomez also co-starred in Spike Lee's hit film Inside Man alongside Denzel Washington and Jodie Foster, while his first poetry album was named Spoken Word Album of the Year at the 2006 Los Angeles Music Awards .

The festival also includes special readings that will commemorate the life, work and struggle of Mahmoud Darwish, the respected and celebrated Palestinian poet who died in August this year. The readings form part of an internationally coordinated effort to honour this great artist and man. Saturday, 4 October sees a full day of activities at the BAT Centre, which includes poetry workshops, open mic opportunities, the Durban SlamJam with Sakhile Shabalala, Lexikon, Ngonyama, and American slammers, Kesed Ragin and Tahani Salah, all culminating with the Festival Finale on Saturday night.

Apart from the evening performances at the Sneddon and the BAT, a packed daily programme includes performances, seminars, workshops, poetry competitions, and school roadshows.

The full programme of activities, plus participant bios and photos, is available on http://www.cca.ukzn.ac.za/Enquiries to 031-2602506
Posted by Gary Cummiskey at Monday, September 08, 2008
Labels: Poetry Africa